I asked my mom what kid’s show I should write about and she said, “What about Lamb Chop?” I honestly hadn’t thought of Lamb Chop since I was 4 years old. Lamb Chop’s Play Along was one of those shows that you remember fondly and then you watch it when you’re an adult and it’s slightly disturbing. Why did my mom think it was okay to let me watch a ventriloquist/puppeteer at such a young age? Those kinds of people are on the bottom rung of entertainment. Shari Lewis was no different.

I remember watching Lamb Chop’s Play Along in the early 90’s. There were a couple of characters including Lamb Chop herself and her two friends Hush Puppy and Charlie Horse. Their names are so cutesy and clever that it pains me. As a show with puppets goes, Shari would sit around and talk to her hand while 4 year olds like me had no other choice but to watch in amazement. I think I even had my own Lamb Chop doll, so I must have been really transfixed.

It’s hard to believe that Lamb Chop had been around way before she had her own show. She made appearances on Captain Kangaroo in 1956 and then became famous from the Shari Lewis Show. Why couldn’t Shari Lewis spell her name like a normal person? I’m going to assume that she took a plastic surgery break all throughout the 80’s because she didn’t have any projects going on during that time.

One of the most frightening things about Lamb Chop’s Play along was the larger than life Lamb Chop that would occasionally come out to dance with Shari. How confusing is that for kids? I thought Lamb Chop was small, but apparently she’s a giant now…?

Watching the show now, I realize that Charlie Horse is Jewish. That may or may not be because Shari Lewis is of Jewish descent and she’s unable to do more than 2 accents. Also, Charlie Horse is wearing clothes that would be appropriate for any 90’s child–a shirt, shorts, sneakers, even a backwards baseball hat. Why does a horse that talks like a Jewish old man need clothes like that? Lamb Chop kind of gets the shaft and doesn’t get any cool clothes. Hush Puppy gets a modest amount of clothing, but his accent sounds like he’s from Mississippi. You win some, you lose some, I guess. 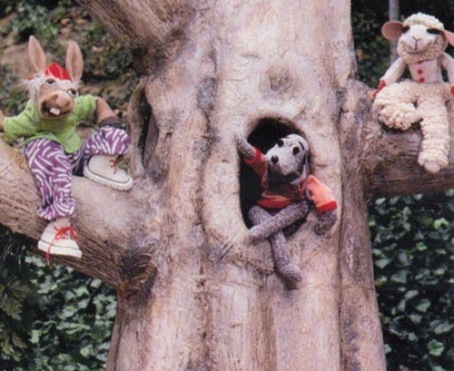 When the show was over, all the puppets would gather and sing “The Song That Never Ends”. Shari would act like it annoyed her, but if it really annoyed her, wouldn’t she threaten them to never sing it again? Or just avoid Lamb Chop’s Play Along in general? Shari, you created these monsters, it’s up to you to put a stop to them.

In all seriousness though, Lamb Chop was super cute. There were other shows with puppets around, but I have to admit that Shari Lewis was a fine ventriloquist. You could barely see her lips moving. I don’t know why anyone would want that to be their life’s achievement, but whatever.

14 thoughts on “Lamb Chop’s Play Along”