For some reason I associate rock-bottom in my life when I was sitting on the couch in 7th grade after school with a family-sized bag of cheese doodles watching the television show Recess. Needless to say, the bag was finished by the time the episode ended. Let’s not talk about food for once. Let’s talk about every kid’s favorite subject in school and the TV show about it, Recess.

Recess stars TJ, Vince, Spinelli, Gretchen, Mikey, and Gus. Does a carton really star the drawings though? I know off hand Andrew Lawrence voiced TJ and Pamela Adlon voiced Spinelli but other than that I would have to do some research and if there’s anything you should ever know about the authors of this blog is we’re not go-getters who bother trying very hard.

The true charm about this show came from all of the elements occurring during recess. It was an entire world out there away from the classroom. The kids had their own society. Ruling the playground was King Bob, a sixth grader who did nothing but sit on top of their jungle gym, Old Rusty. There were The Diggers, two brothers who dug holes for fun. There was Swinger Girl who dressed like Amelia Earhart and always swung on the swings. In one episode she swung over the top bar and the kids were convinced she entered a parallel universe. A kid tried that in my school, missed, and now he has half-a-face.

Most memorable were the side characters called The Ashleys. This was I’m guessing a tribute to the film Heathers where a group of preppy girls all named the same, in this case Ashley, got together to make everyone else’s lives miserable. There were two black Ashleys and one of them never spoke. I thought this was strange because some poor artist had to continually draw a character only for her to never speak. Considering Recess was part of the Disney Corporation we can assume she would have done nothing but talk about Watermelon and “getting her hair did.” 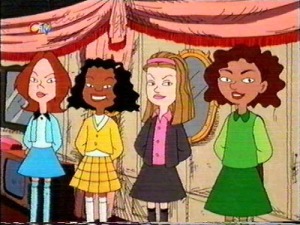 (I think the one in the green never spoke. The hot one was the leader. If you’re asking me which one the hot one is then you’re an insane person)

Many of the adults on the show like most kid’s shows were evil. Principal Prickly was, well, a prick. Perhaps the scariest was Miss Finster. She was old, hunchbacked, and no man ever married her. Or maybe one did. I know in one episode she mentioned having an affair with a man in Hawaii or something like that. Maybe the crunching of the cheese doodles was so loud I misheard. Miss Finster’s sidekick was a tattle tale named Randall Weems. I knew a lot of kids like this because I grew up in the era of tattling on others. Each time Randall would rat out a student doing something bad Miss Finster would toss him a cookie. Okay, maybe it wasn’t every time but she definitely did it once.

(No relation to Chuckie Finster from Rugrats, Miss Finster ruled the playground with an iron fist and incredibly saggy breasts)

I’ve seen every episode of Recess but by the time the movie came out I had no interest. I’ve never been a fan of movies based on TV shows. The plot was something about James Woods taking away recess. The character wasn’t actually James Woods. This isn’t Family Guy where he plays himself. Wasn’t James Woods a respected actor at one point? Who did he upset?