Have you ever sat around wondering what Survivor might be like if instead of adults there were teenagers and instead of Jeff Probst there was a ginger hosting things? Look no further than Moolah Beach. Premiering on September 8, 2001 (no coincidence to the terrorist attacks days later I’m sure) Moolah Beach was a show with a lot of potential that ultimately fell flat, kind like two towers I’m thinking of. Yes, I’m having that kind of day. 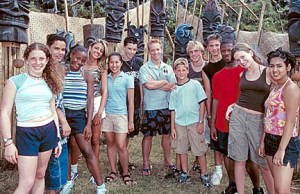 (Are half these kids taller than the host? Why don’t they just kill him and rule the island Lord of the Flies style?)

I remember this show being part of ABC’s “One Saturday Morning” lineup. I tried to talk to my friends at school about the show, but they all seemed to always go places on weekends rather than watch television. The show was filmed on a Hawaii beach and centered on the 13 Gods of Hawaii, all of whom were killed when America annexed them. Why has there never been a movie made about how we hoodwinked those poor Hawaiian natives? Hoodwinked of course being the nice way of saying brutally murdered so we could have a nice vacation spot.

The goal of the game was to collect different idols, each representing the earlier mentioned Gods. The way to earn them was through winning missions and eliminating your opponents. On the first day at the beach teams were selected in boy/girl fashion with one on each time. I remember there was a nerdy kid with the ugliest girl and everyone was obsessed with the hot chick Summer who looked like a young Brittney Spears. This is why teenage boys should not be on game shows. They pick their teammates based on the boner size they get from them.

(It’s impossible to find a good picture of Summer alone but here she is second from the right standing next to what I’m guessing is a young Alex Winter from the Bill and Ted films. Alex Winter was the one who isn’t named Keanu)

Teams were eliminated in a very unique way. All teams would vote on which team they hated the most which was almost always the nerdy kid with the ugly girl. The team receiving the most votes would then pick an opponent to go up on top of a mountain to face in some challenge. The challenge was basically rock, paper, scissors but with the elements water, fire, and wood. Water puts out fire, fire burns wood, wood floats on water. It was a mystery to the teams what happened at these face-offs and I remember the ugly girl telling the nerdy kid to say the had to put their hands on something really hot and whichever team can hold their hand on a hot pan longer got to stay in the game. Summer seduced the nerdy kid into telling her the truth and the ugly girl got really pissed off. Summer is the reason why pretty girls always go missing.

The show’s big mystery was in one of the 13 idols was the $25,000 prize so you really wanted to get as many idols as you could to bolster your odds. In the finale Summer’s team had way more idols than the other team. Bribes were given to give up idols to the opposing team. The team that was not Summer’s team, the green team, accepted the bribe. This is what they got:

1) Playstation 2 and a collection of games

3) Free McDonald’s for a year

I can say without hesitation not a single one of these prizes would have tempted me except for the fact I’m pretty sure added all together they could possibly equal near $25,000. How much is selling a ticket to meet Mark Martin worth?

It was revealed that the idol Hula had the $25,000 prize and the green team made a good decision accepting the bribe because they never had the Hula idol. Summer won the game despite being a complete beautiful tease who probably has had everything handed to her in life. If this show taught me anything it’s that I should be resentful of pretty girls.