Since it’s Christmas Eve and I have nothing better to do, I thought I would write a piece on holiday kid’s movies. Every kid likes a classic movie about Christmas to prove that Santa is indeed real and all their friends are jerks and have bad parents.

How the Grinch Stole Christmas is obviously the best Christmas movie ever of all time. Dr. Suess had a way of bringing people together through his stories. Well, mostly just with this story. I don’t think Fox in Socks or Go, Dog. Go! really brought anyone together.

I liked that the Grinch was very thorough when he was destroying their Christmases. He even took the crumbs. I was glad though, when the Grinch’s heart grew 3 sizes that day. The audience really got to see the best of both worlds. His plans weren’t foiled so we got to see everything go according to plan, but we also saw him do the right thing and give them all back. So the moral of the story is that you can have Christmas even without presents and decorations, but it will most likely consist of holding hand and singing. 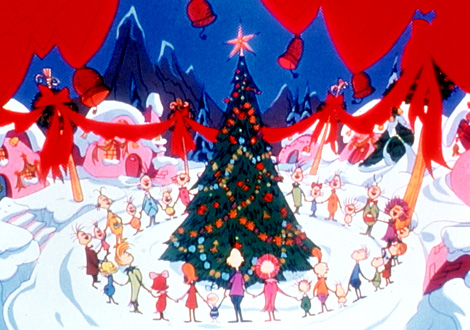 If you like clay-mation, then you’ll appreciate Rudolph the Red-Nosed Reindeer. I introduced this movie as if no one’s seen it. This is a great story explaining that even Santa’s reindeer can be bullies. Rudolph was born differently than the other reindeer—he had a red nose that glowed. In the movie it also made an annoying sound.

The story isn’t solely about Rudolph though. Hermey the elf is also an important part of the story. He’s not skilled at making toys though–he wants to be a dentist. I think this is a smart route for an elf. Do they even have elf dentists? They probably need one.

Don’t forget about the Island of Misfit Toys where all the defective and unwanted toys went. It always made me sad to think that Santa’s elves messed up enough to make an island of sad toys. AN ISLAND! But turns out there’s only like four toys on the island so it’s not too bad.

Also, there’s Yukon Cornelius who has the best mustache in town. And the Abominable Snowman aka Bumble. It’s a great story with colorful characters and more importantly, good songs.

The Snowman is a lesser known children’s movie, but it’s one of my favorites. It’s about a boy who builds a snowman during the holiday season and his creation comes to life. The boy goes flying with his new snowman friend and meets his snowman family. It’s magical, sad, and touching. The animation is really soft and sweet. I’d definitely recommend it!

Lastly, no list is complete without a depressed main character. Charlie Brown’s Christmas really wraps up how people of all ages feel during Christmas. Everyone in The Peanuts gang are all so different, anyone can relate to the show. There are always people who are caught up in festivities and traditions, some people like to be with family and friends, and there are those who buy the wimpiest tree around while their friends laugh at them. And that would be Charlie Brown.

Lucy’s idea of the “modern spirit of Christmas” is perfect because she likes the finer things in life (like most people). I like when she says, “Can’t you even tell a good tree from a poor tree?” Even Snoopy laughs at Charlie Brown’s choice of tree. Charlie just wants to know what Christmas is all about. Is that so much to ask? Linus basically recites the Bible and tells Charlie to calm down and all is well. It’s worth watching if only to see the gang ice skating and dancing to Schroeder’s piano playing.