Sometime in the 1990s Nickelodeon executives got together in a room and wondered if they could put together a show that was Family Feud only requiring less mental skill. I know, pretty impossible. Families on Family Feud tend to be inbred anyway. Why else would they high-five each other? The only time you high-five a family member is when you’re banging them on the side. The Nickelodeon executives finally came up with what their Family Feud rip-off show would be, a little diddy called Double Dare. 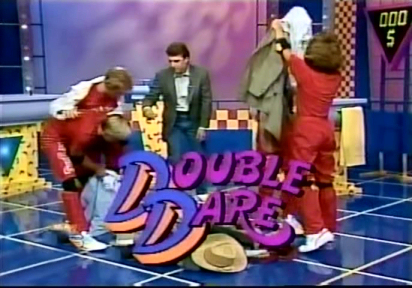 Double Dare consisted of two families of four facing off against each other in mental and physical challenges. The host, Mark Summers because he only got one paycheck for everything he did, would read a question to the first team. If the team could not answer it correctly they would dare the other team to answer. The question would go to that team and they could then double dare the originally asked team. Things would get interesting because now this team could either take a guess at the question or accept a physical challenge.

The physical challenges usually consisted of doing things like shooting water balloons into giant pants or throwing pies at your sister. They weren’t so much physical as they were target practice. Everyone always liked the physical challenges more because there was less learning involved. There was also always the hope you might see someone snap their neck after slipping on Nickelodeon slime.

(How is this fun? Someone at some point must have been blinded by slime)

Points would add up over the course of the show based on how many questions were answered correctly and how many physical challenges were completed. The team with the most points when Mark Summers decided to end the game would go onto the final round as is the only logical direction the show could have gone in.

The final round was the most fun. I like to think of it like the Home Alone movies. Who wants to watch a film about getting along with an old man who carries around a shovel and doesn’t talk to his granddaughter? I remember watching the second Home Alone movie at a friend’s house. When he tried fast forwarding through the boring part with the pigeon lady living above Carnegie Hall she yelled at him. If Tivo existed back when Double Dare was on I think more people would have fast forwarded to the end. Not that my family could ever afford Tivo. For some crazy reason my parents thought it was more important to actually go out and do stuff rather than pay more to the cable company.

More than just being the finale, the final round was an obstacle course. This was brilliant because all kids love obstacle courses. The only fun day in gym class is when you do the obstacle course. Unfortunately those obstacles don’t prepare you for the ones in real life. Not since gym class have I had a lesbian gym teacher yell at me for not swinging on a rope properly.

The obstacle course had everything you would expect. There were slides, things to climb up, levers to pull, and gallons of green Nickelodeon slime everywhere. I’d make an alien ejaculation joke here but I feel it’s beneath me at this point in my life. Plus, do we really know theirs would be green? My personal favorite thing that would appear in the obstacle course was a giant nose. At each station in the obstacle course the family members would have to grab an orange flag then hand it off to the next family member who would put it down their shirt then continue on. The giant nose was a stationary item that would need to have an arm stuck up its nostrils in hopes the family member could find the orange flag. This was never too excited but seeing someone pick a giant nose made me feel better about sitting at home picking my own.

(What’s the point in the mat? The kid is already reaching into a gigantic plastic nose. He’ll never get a girlfriend)

Double Dare was a pretty good show, although it was a little segregated. They limited themselves to families of four. This was almost Nickelodeon’s way of saying all families should be a mom, dad, son, and daughter. Most families were also white. I don’t think Nickelodeon was turning down other races. Other races just knew how ridiculous it would look to stick your arm up a giant plastic nose they decided to become doctors or NBA stars.