I don’t know how many Under the Umbrella Tree fans there are out there (hopefully none) but if you’re one of them, this one’s for you. Your parents must have hated you.

Under the Umbrella Tree is a show about a woman, Holly, who lives with three puppets—Gloria the gopher, Iggy the iguana, and Jacob the blue jay or blue bird or whatever. They have a huge Umbrella tree in their house and they all hang out in the room where the tree is. It’s weird to name a show after an object in a room, but it was the 80’s and they were probably trying really hard to be cool. Under the Umbrella Tree is also really hard to say if you’re a young child watching the show. Couldn’t they have called it Holly’s Place or something easy? I should really be in charge of all TV shows.

Okay so Holly was kind of like the caretaker of these animals. She was sort of a bitch. Actually, she wasn’t very likeable at all, which is misleading because she looks really nice. Holly always had sweet 80’s clothes though, I’ll give her that. One time when Gloria, Iggy, and Jacob were sick she bought them all handkerchiefs and they were the size of table cloths. It was so retarded. She’s obviously not capable of doing the most minor tasks. And she always seems annoyed by how much work these animals are to take care of. But in reality, they’re animals, with human characteristics who can talk and wash dishes and play together. They’re less work than babies or animals. She’s very condescending and puts on a weird fake voice. Unless that’s her real voice, in which case, yikes. Let me also mention that Holly is in her late thirties and single so she’s basically unlovable. 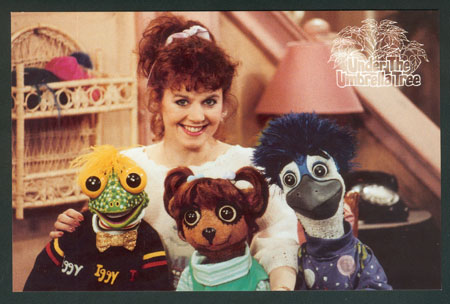 She looks young here, but on the show she has wrinkles.

I don’t know why anyone would want a gopher as a pet, but whatever. Gloria has mentioned that she has a burrow somewhere in the house which is weird because if that’s the case, shouldn’t she just live outside with other gophers and have a normal life? She wears clothes, collects hats, and has human hair that she wears in pigtails. If they hadn’t mentioned that she was a gopher in one episode, I wouldn’t have a clue what she was. I kind of feel bad for her though because she’s the only girl amongst two guys a la Lamb Chop with Hush Puppy and Charlie Horse.

I would describe Iggy as the leader of the pack. They all have strong personalities, but Iggy is the most likeable. His eyes bulge out of his head and he has weird fuzzy hair. Iggy kind of got shafted in the name department since that’s the go-to name for iguanas. I know this because I’m pretty sure there’s a Beanie Baby named Iggy who’s an iguana. And one of the Rainforest Café friends on the kid’s menu is named Iggy and he’s an iguana. JUST SAYIN’. Anyway, Iggy is cool but he always has to overly explain things to the audience. For example, if they all decide to go on a bike ride Iggy would totally say something like, “Yeah! Bike rides are fun and a good way to exercise!” It’s like, okay cool. We get it. 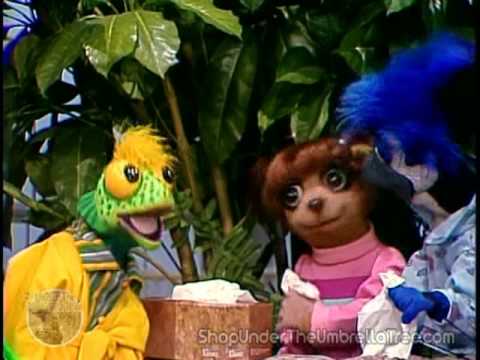 Iggy bossing everyone around.

Jacob is just kind of there. He looks the most like the animal that he’s supposed to be. He usually wears sporty clothes which makes one assume that he likes sports even though he shouldn’t because he’s a bird. I also remember him saying something about collecting baseball cards which is totally lame. But it’s a step above Iggy who didn’t have a collection. Iggy ended up trying to collect balloons, but originally he wanted to collect sandwiches—an iguana after my own heart.

Overall, Under the Umbrella Tree is a dumb show and I regret watching it when I was two years old.

10 thoughts on “Under the Umbrella Tree”