I was never a huge fan of The Magic School Bus because it was totally implausible. And its main purpose was to help kids learn. So unnecessary. I’d learn enough at school. Why would I want to come home, turn on the TV and learn some more? My fourth grade teacher used to put in The Magic School bus VHS tapes when she didn’t feel like teaching us anymore.

The show was about a class of 8 and their teacher Miss Frizzle aka The Friz aka barf. First of all, what school has a class of 8? Maybe they were the slow kids or something. That isn’t very likely though because they’re still smarter than I’ll ever be. And their class was super multicultural. Like, more so than any other show I’ve seen. There were 3 white kids, 2 black kids, 1 Asian, and 1 Mexican. When has a class ever been that diverse in the history of all time? Never. Oh and one of the white kids was a ginger. It’s just simply improbable.

Miss Valerie Felicity Frizzle was voiced by Lily Tomlin. I approve of this casting decision only because her name is Lily and she’s funny. But she’s lacking in the cute department. Miss Frizzle is a red-headed maniac of a teacher who loves to learn in a hands-on way. She drives a magic school bus which can go anywhere from Mars to inside the human body. She wears really flamboyant dresses everyday which are patterned with the subject of the day’s lesson on them. For example, if the class was going to space, she would wear a dress with planets on it. It’s really a deep show.

Miss Frizzle was always super cheesy and she would say things like, “Bus, do your stuff!” or “Wahoo!” or “Seatbelts everyone!” How did she get permission to go on all these field trips. She should probably be fired or put in jail. Also, she’s not married so it’s not like anyone would miss her.

Is the head piece really necessary?

Miss Frizzle had a pet lizard named Liz. Like, really? Liz is the name you choose for your pet lizard? That offends me. Anyway Liz is a stupid character. She can understand English, but she doesn’t talk. She can help drive the bus and do all sorts of things but at the end of the day she’s still just a lizard.

Dorothy Ann, or D.A. for short, was the character that I immediately connected to solely because of her hair color. She was the only blonde haired girl and had the cutest outfit out of all the students. However, her personality wasn’t the best. She was too involved with learning and always talked about her calculations and research.

Keesha looks like a character out of the 80’s. She wears an over-sized sweater and tights every day. She’s sarcastic and argumentative. She’s usually seen arguing with Ralphie, another classmate, which makes me assume that she’s in love with him.

Carlos is probably the best character on the show. He makes at least one bad pun per episode. The class gets really mad at him when he does this and they always shout, “CARLOS!” like he murdered someone. They don’t have time for awful humor I guess. Daniel DeSanto, a member of The Midnight Society was the voice of Carlos. 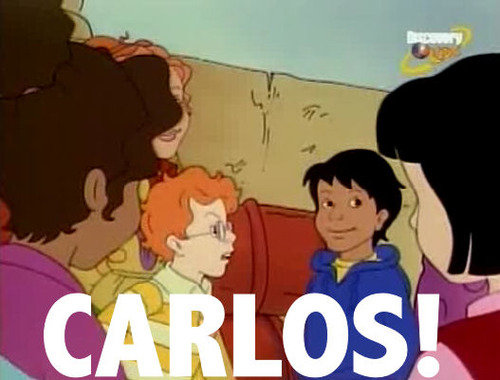 Ralphie was the TJ Detweiler of the group. They look almost identical. Ralphie liked sports and was apparently a jock even though he was kind of chunky and no one liked him. Like I mentioned before, Ralphie and Keesha fight often, but secretly wanna make out.

Phoebe was kind of a bitch. I never liked her because she would always talk about her old school. She was the newest student to Miss Frizzle’s class and I’m surprised the students accepted her. Miss Frizzle should’ve been like, “If you like your old school that much then you should go back there because none of us like you.” And then she would’ve cried. That would’ve made a great episode. 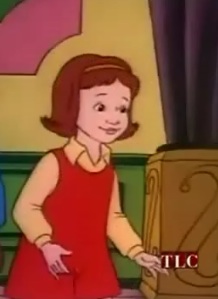 I literally know nothing about the character Tim. He’s a quiet black student who keeps to himself. According to Wikipedia, Tim had an African accent at the beginning of one season and then later in the season, he spoke with an American accent. Weird. They also say that his catchphrase is “We’ve been Frizzled.” What does that even mean? Tim, go home.

Arnold Perlstein is the ginger Jewish scaredy cat classmate. No show is complete without one. Wiki says his catchphrases are “I knew I should have stayed home today” and “I have a bad feeling about this” and “Couldn’t we watch a film strip instead?” A film strip? Are you from the 50’s? Look, if you don’t appreciate flying buses, then you should be in a different class you big complainer. There is a lot of information on Arnold throughout the series and his cousin Janet even appears in some episodes. Janet is super annoying and a horrible person. She looks exactly like Arnold. Arnold is voiced by our hero Danny Tamberelli.

Lastly, Wanda is the Asian of the group. She’s very gung-ho and loves adventure. She’ll probably take Miss Frizzle’s place once the old bag dies. Wanda often calls her classmates “weasly wimps” and they don’t seem to mind. I would vote her off the island immediately. 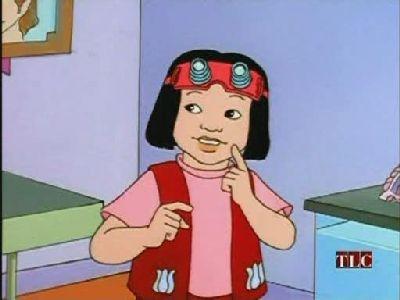 And then there’s the bus. The bus has a face, but like Liz, he can’t talk. He just takes orders. Tough life.

11 thoughts on “The Magic School Bus”