A 1980s National Geographic survey revealed one in four people could not locate The Soviet Union on a map or the Pacific Ocean. I know cocaine was big in the 80s but did it make everyone that stupid? The Soviet Union was pretty much half of Europe. You could accidentally point it out. And the Pacific Ocean, you basically have a one in two shot. Because everyone was so stupid PBS decided to create a TV show based on a popular computer game, Where in the World is Carmen Sandiego? The result was terrifying.

I was one of the last people to get a computer. Actually, that’s not fair to say. Probably like 60% of the world still has never used a computer. I was the last person who matters to get a computer. Hey, if people are too dumb to know where our enemies are located I should be free to insult most of the planet. My point I’m trying to make is I never got to really play the computer game. I know it was all about using geography clues to find out where criminal Carmen Sandiego was. This is what is often referred to us “disguised learning” or preferably “parents not working hard enough to show their kids that education is valuable.”

The show had many similarities to the game. The main goal was to locate Carmen Sandiego. There were two main actors on the show who tried to help you win but not really. They were The Chief played by a woman. No wonder Carmen Sandiego was always getting away, a woman was in charge of catching her. There was also another guy named Greg Lee. According to Wikipedia he was very goofy, which is the same adjective I would use to describe a pedophile. 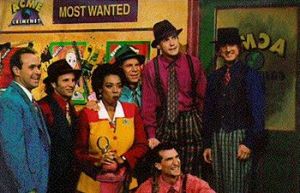 (Greg is the guy on the far left in the blue. The commissioner is the black lady. The other guys are currently unemployed)

Three rounds made up the show. Three rounds are also the amount of bullets you’d want in a gun if you were to watch this show with friends. Really, it was nothing special.

The first round was incredibly confusing and took a lot of geographical guessing. The lightning round was used as a simple comedy skit to add some “Crime Bucks” to the player’s scores. Following that was the Phone Tap round. This involved looking through a fake trash can then listening to a conversation in an attempt to figure out what location on earth they were talking about. After watching The Wire I know how boring phone tapping can be. It’s all about getting an avadavat which for some reason judges never want to give. The last part of round one was called The Chase and the Wikipedia description makes no sense so let’s pretend I’m not just looking at that page to get all this information. 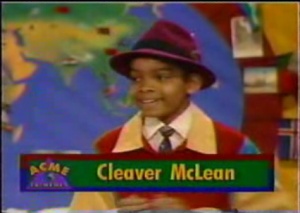 Round two began with one player having been eliminated after the first. The remaining two contestants would have images of famous landmarks flashed in front of them. They were to guess the locations of these places. Like for instance if they showed a gay nightclub you would know to guess anywhere north of the Mason Dixon line, east of Philadelphia, and south of Connecticut. Basically, New York. I know they like gays in Vermont too but people in Vermont don’t like night clubs. Have you ever tried to kiss a man in 10 degree weather? I’m not going to answer that question because you don’t need to know what I do with my life.

The final round came last as is the order of the Universe. This was the opportunity for the final contestant to try to catch Carmen Sandiego. I was never a huge fan of the show but I saw enough episodes to know kids rarely managed to catch her. The host would call out the names of different cities or random places and the child would have to place a light-up thing on the proper location from an impossible to see map on the floor. I never like a game show where “the house wins” because it’s an excuse for them to not give out any prizes. 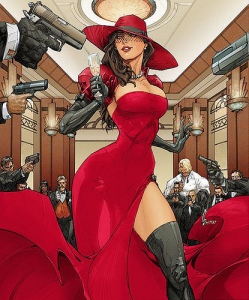 (A woman who looks like this cannot simply disappear)

Where in the World is Carmen Sandiego could have been a great show if only the kids had a chance to win. I’m surprised more shows like this aren’t popping up now. You don’t have to pay too many people and you never have to give out prizes. And the prizes they gave away on these shows were just advertisements for Florida anyway. Why am I so bitter about a fake female criminal? She had nothing to do with this. If anything she was against the show. Carmen is good in my book.

(I ended up watching an episode. It’s incredibly cringe-worthy and the contestants look miserable. The best part starts at 6:15. Please watch it and realize these kids are just completely guessing)

26 thoughts on “Where in the World is Carmen Sandiego?”