KaBlam! was one of the weirder shows that Nickelodeon aired. I think they were trying to be really creative and it just turned out to be totally bizarre, kind of scary and slightly boring. However, it was refreshing to have a show filled with animated shorts—always hoping that your favorite one would be played during new episodes.

The theme of KaBlam! was “where cartoons and comics collide.” Think Robot Chicken but for kids. There were two animated hosts, Henry and June. Henry had green hair and tan skin and June had white skin and blue hair. I don’t get it either. They would both make little jokes at the beginning and in between shorts. Their jokes were bad, but I guess someone had to host the show.

I can’t look away from June’s man-hands.

Also, whoever the artist was that created Henry and June was awful. I can draw better than him/her. Still wondering why Nickelodeon hasn’t hired me for their creative team yet.

The first cartoon that KaBlam! introduced us to was Sniz and Fondue. Apparently they were two ferret “roommates” that get on each other’s nerves. I always thought they were cat brothers. If I can’t tell what animal you draw, then you’re a bad artist. I’m sensing a bad animation theme arising. There wasn’t anything new or different about Sniz and Fondue. Like, how many odd couples can Nickelodeon possibly think up?

A common short that was featured on the show was Action League Now!. This show kind of bored me at times, but I do have to give them props for using a stop motion camera and actual action figures. It was new and different and I appreciated it for what it was worth. I was mature for my age, okay? The action league was kind of funny because they were all so stupid. They tried to solve crimes in sunny suburbia but always ended up melting or getting carried away by a neighborhood dog or something. Action League Now! was the only short to appear in every single episode of KaBlam!. Maybe because they both had unnecessary exclamation points?

Life with Loopy was definitely my favorite segment of the show. The animation was awesome the show was so weird that it was almost creepy. The show was through Loopy’s brother, Larry’s eyes. Loopy was his younger sister and got into all sorts of trouble. My favorite episode was when she lost Larry’s baseball in the couch cushions and had to dive into the piece of furniture. It turned out that the couch was miles deep…and I don’t know. It sounds really lame now but I swear it was cool.

The most boring short in KaBlam! was Prometheus and Bob. I don’t know why the creators thought that kids would be interested in a claymation friendship of an ignorant caveman (Bob) and an alien (Prometheus) but they decided to give it a shot. Often times I would leave the room when Prometheus and Bob came on because it bored me to tears. I’m not even going to include a picture because I hate them so much.

The Offbeats was a short cartoon about loser kids that wanted to be popular. One of them was voiced by Mischa Barton so I guess that’s kind of cool. They kind of reminded me of the Peanuts gang, but less loveable. And then I would realize how much I would rather watch Charlie Brown than this lame show. 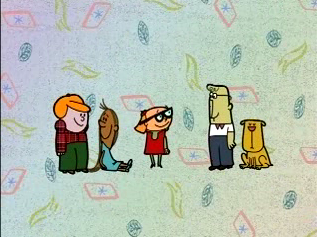 Lastly, one of the shows I really enjoyed was Angela Anaconda. The animation was awesome because it used pictures of real kid’s faces as the characters but they gave them drawn on bodies. Kind of clever. Angela was an unkempt nerdy girl just trying to make it through school. Her nemesis was a girly girl Nanette who made fun of Angela daily. It was a cute show and eventually got picked up by Fox and made into a real show. I always had good taste in kid’s shows. 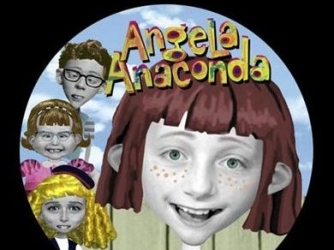 KaBlam! was filled with random clips, cartoons, and even some music videos. It was weird, but Nickelodeon was a weird channel. When I was young, I would’ve rather watched a weird show than play outside.