Rather than do separate pieces on the original Dennis the Menace Show, the cartoon, and the movie, I am going to fit them all into one. They’re all pretty much about the same thing, a blonde haired boy named Dennis who is a bit of an asshole. 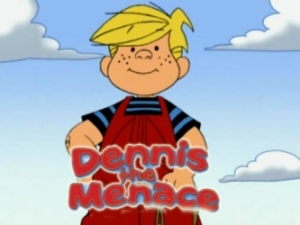 (They had to say he was a menace instead of an asshole because there are no names that rhyme with asshole. Does Pascal? Pascal the Asshole?)

The original series premiered in 1959. It was in black and white which means hipsters watch it today to be ironic. It was also impossible to tell if anyone on the show had bad skin. In 4 seasons the show had 146 episodes. They had 32, 38, 38, and 38 episodes. Could you imagine if a show today got to be on that much? Most sitcoms are 22-25. Think of all the extra Sheldon jokes on the Big Bang Theory we’re missing out on.

This show was a replacement for Leave it to Beaver which means it isn’t as good as Leave it to Beaver. Is it just me or do more college guys need to start saying “Leave it to Beaver” when talking about how they need a woman in their life to solve their problems? I don’t know. I feel alone in this unneeded statement. I wanted you all to think I actually know what it’s like to go to college or that I am smart. Keep in mind, going to college does not make you smart. All it means is you know your band will probably never make it. 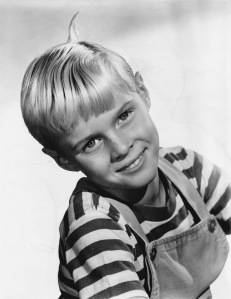 In 1986 Dennis got his own animated series. This introduced Dennis to a whole new generation, the Generation X’ers. Armed with a slingshot and a cowlick in his hair, Dennis Mitchell set an example of troublemaking for future Nirvana fans everywhere. Look at me, I sound like I actually remember 1993.

Speaking of 1993, that is the year the live action film came out. Christopher Lloyd made an appearance as Switchblade Sam, a villain in the film. Christopher Lloyd plays a great villain because his hair is scary. Another notable actor appeared in the film as one of the main characters. Dead actor Walter Matthau played Dennis’s biggest hater, Mr. Wilson.

Mr. Wilson was Dennis’s neighbor. He is the token “get off my lawn kid” old man. Mr. Wilson is never accused of pedophilia in any version of Dennis the Menace because he hates kids so much. I think that was his strategy all along because by the end of the movie he sort of makes up with Dennis even after he lights Mr. Wilson’s head on fire at one point. Maybe not. I might be thinking about Home Alone which was a much better movie. 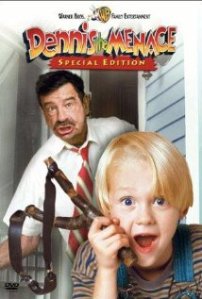 Dennis the Menace is a classic character. Still, that doesn’t justify him being a pretty lame one. Dennis does light troublemaking things like flooding Mr. Wilson’s lawn or using a needle to poke holes in his father’s condoms because he wants a new baby brother. Dennis simply doesn’t fit in with today’s society because kids are so much worse. They’re getting pregnant and suicide bombing. In today’s world Dennis would not be a menace, he would be a slight inconvenience.

17 thoughts on “Dennis the Menace”