What’s with me writing about groups of kids with cutesy nicknames for their gangs? Okay well maybe I’ve only written about The Backyardigans and now this one so jk never mind. Anyway I totally wish I grew up with a group of friends that were as diverse and closely knit as these kids. My friends were mostly one person that I sought approval from and didn’t spend a lot of time with.

I don’t know how this foursome became friends, but something tells me their parents were friends and then made their children become friends because these kids have nothing in common. Besides the fact that they all go to the same school. 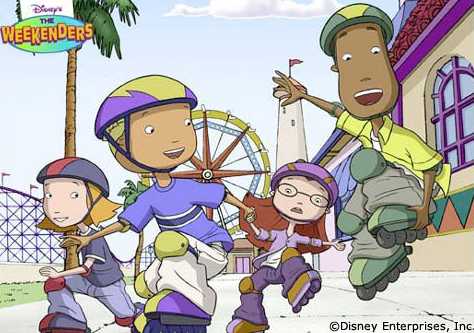 The “leader” of the gang is boy named Tino. He’s the leader because he’s the only white male so he wins by default. I also consider him “the main character” because at times he talks to the camera and tells the audience what he’s thinking or what’s happening. It’s slightly unnecessary and it causes the viewer to have a more intimate relationship with Tino over any other character. Tino is pretty regular. He doesn’t have any quirks and he’s kind of a boring friend. But he’s nice and cute so whatever. Disney wasn’t very adventurous when it came to their character development. I think they tried to play it safe with their TV shows. Movies are a different story.

One of the girls in the group is Lor, a tom boy blessed with twelve brothers. Yes, that’s Disney’s way of being exciting. Isn’t that CRAZY that she has twelve brothers!?! Sure. I also hate the nickname Lor. It’s so harsh and weird. I also think that this Lor in particular has cross eyes or a lazy eye or something. She’s pretty weird looking. But she’s into sports so I guess it doesn’t effect her athletic abilities?

The best dancer in the group is probably Carver. And I’m not just saying that because he’s black. In the intro, each of the members can be seen dancing and Carver just happens to have the best moves. A fan of clothing, and acting “cool”, Carver would have to be my favorite. He’s the least annoying out of the bunch. To be perfectly honest, I would watch a show with just Carver and Tino. They like to play video games and play pool and it just seems way less cool when the other two girls are around. Especially Tish.

See how the girls just watch the guys do cool things? So lame.

Tish has a head shape that I hate. It’s so square and weird. Maybe Disney was trying to do a weird head shape thing, but they really need to leave that to the experts at Nickelodeon. If I were part of the group, I definitely wouldn’t allow Tish in (maybe this is why I only had one friend?). I’m sorry but she’s such a buzz kill. She’s the smartest of the group, a vegetarian, a lover of arts and music, Eastern European (I think her parents are immigrants? Who cares?), really soft spoken, modest, and kind. Like, go away. The weekend has no time for your gentle demeanor. Granted, you can have all the same attributes that Tish has and actually be a cool person, but she manages to not be. I don’t know why her friends accept her.

Overall this is a cute show. It takes place mostly on Friday, Saturday, and Sunday (der) and they usually hang out at the mall or at their ever-changing pizza joint. These kids have a lot of freedom for only being in 7th grade. They’ll probably split up once they’re in high school. Why do I enjoy planning everyone’s demise?

6 thoughts on “The Weekenders”