On June 6, 1944 a bunch of ships were launched from England headed for Normandy in France in something famously referred to us “Operation Run Up A Beach Without A Shield Trying Not To Get Killed.” This launch helped the course for the Allies winning WWII. I’m here to talk about another launch though. I’m here to talk about the Disney Channel Original Movie that helped to launch the careers of many of our favorite and least favorite kid’s stars, High School Musical. 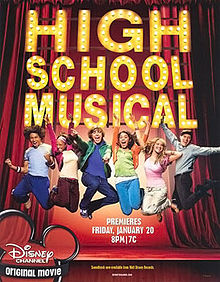 No one could have anticipated how big High School Musical would have turned out to be. I say the same thing about my wife. Does she ever stop eating? I’m kidding, I’m not married. But if I was married it probably would be to someone who can’t stop gaining weight.

The film starts off on New Year’s Eve at karaoke (I already want to vomit) when Zac Efron and Vanessa Hudgens are both called upon to sing a song together. They’re immediately attracted to each other because Vanessa Hudgens is really pretty and so is Zac Efron.

(Look how beautiful they are! By far my favorite lesbian couple)

Winter Break ends, and yes it’s winter break because they have to be politically correct, and school starts again. It turns out Vanessa Hudgens has moved into town because her father is a cannibal who was chased out of her old mountain town. Not really, but that would have been cool.

The two pretty girls remain friends and Vanessa Hudgens tries to get Zac Efron to sign-up for the school musical. Zac Efron is torn because he’s a basketball player and it would ruin his reputation as being straight. The big problem here though is that the drama club is beginning tryouts for a play in January and the play is performed before basketball season ends, which would probably be sometime in March. What do they do the rest of the year? I thought high school usually spent all year preparing for one play and selling some cookie dough or crappy pizza on the side. I should probably have a bigger problem with the random song and dance than this, but I don’t.

As the film progresses, Zac Efron has to figure out if basketball is more important to him than having sex with Vanessa Hudgens, which he will most likely get to do if he joins the drama club. Vanessa Hudgens though is really quiet and a geek in the film so she’s very attainable. He could have easily stuck with basketball and still gotten her.

(At one point Zac ends up in prison and has to dye his hair even more blonde to fit in with the Aryans. Vanessa proves to him that she’s loyal though and often comes to visit him. The above screenshot is after he tells her that he’s breaking out and will be able to make the audition on time)

The film isn’t actually about a school musical either. It’s more about trying out for one. One time in high school I wrote the names of a bunch of students I didn’t like on the tryout list for the school play because I thought it would get them in trouble or beat up by their peers. I was so cool.

The big problem in this film though is that the big championship basketball game and the scholastic decathlon that Vanessa Hudgens is participating in (yeah right) are at the same time as the tryouts for the play. Would they really schedule it this way? That’s nonsense. If they knew they had two talented students in their school they would have embraced that, especially if it meant the school could make a couple bucks. The two end up messing with some computers and they manage to get to the tryouts on time and they win the lead roles. Wow. I forgot how bad this movie was.

A few of the other important characters were Efron’s teammate Corbin Bleu who plays himself. There’s also Ashley Tisdale who plays a rich snob character named Sharpay who is trying out for the play with her brother. That seems really gross to me. Why would you want to do any extracurricular activity with a family member besides maybe a funeral? Her brother is some blonde guy who I think I saw at a bar in New York once. Everyone was gathered around him and this was around the time High School Musical 2 came out so I swear it probably was him. I thought the same thing about Michael Cera back in 2006, before I knew what his real name was. I sat at the bar yelling “George Michael! George Michael!” seeing if he would look and he didn’t so it probably wasn’t him, right?

(This is the guy I saw. I didn’t get to see his pale hairless knee though)

There’s also a black chick in this movie who never went on to do much and some random fat girl who got bigger parts as High School Music 2 and High School Musical 3: It’s Not A Cult, We Swear came out.

I should probably mention the musical numbers as this was indeed a musical. I never much cared for any of the music. Especially douche is the end song they sing, “We’re All in this Together.” As if any of them actually believe that. High school is cutthroat. Please don’t make it seem as if anyone else there cares about you.