City Guys would be a great title for a show about mobsters, gangsters, and homeless people in big jackets. But like how The Killers, a semi-sensitive band, managed to snatch up such a perfect metal name, City Guys was snatched up by producers who decided to make it a show about a public high school in Manhattan sans the gun violence. It never was a very popular show, but certainly one that had an effect on me as a young hairless boy. 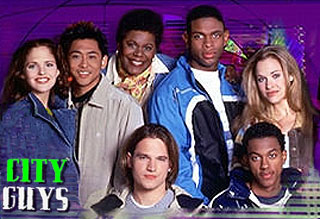 City Guys was on for 5 seasons and had over 100 episodes which means it can be syndicated. Has anyone ever seen a syndicated episode of City Guys? I don’t think so. Nobody wants it. How sad is that? The two main characters of the show are Jamal and Chris. I’ll give you one guess which one is the black one. They’re best friends and do the morning radio show at Manhattan High sometimes called Manny High. This aspect of the morning radio show isn’t all that important to the plot. The only memorable thing about it is them saying “Goooood morning Manny High!” It was very morning zoo.

Jamal and Chris are pretty much the same person. They of course have a diverse group of friends because this is a Manhattan public school. Unfortunately, it’s not true to life. Let’s be honest, most Manhattan public schools are probably ethnic. This school was split evenly among all the races. No school is that evenly mixed.

In this motley group are two females, Dawn and Cassidy. Dawn is a smart and attractive redhead. Cassidy is a bit ditzy and blonde. They may not have the school demographic accurate, but at least they fill in the stereotype of redheads being smart and mousey and blondes being dumb and slutty. I always had a crush on Cassidy because she was blonde and reminded me of the cute girls at school who would ignore me. When I found out the actress was also from New Jersey I thought I might have had a chance with her. I could talk to her about what the odds were that we’d be from the same state. She’d say “1 in 50” and then not talk to me anymore because she was born in 1975 and what would she be doing talking to a fat 14-year-old?

(I guess in one episode they meet Rob Van Dam. Cool)

The group of friends also has two more males who hang with them. One is named Al. Al is some flavor of Spanish. He rides a bike (racist) and has a really big family that lives in a small apartment (racist again). I always thought Al was Asian for some reason, but his last name was Ramos so unless the Spaniards conquered Taiwan at some point, I was wrong. There’s also Lionel L-Train Johnson. L-Train was the Screech character in this show. He was dumb and a lot older than everyone else. He got some of the funniest lines too because the idiots always get the good lines.

The only reoccurring adult character of value was Principal Noble whom the kids called Ms. Noble because they were cruel and I guess wanted to remind her that she was unmarried and alone. Ms. Noble is best known for playing Donovan McNabb’s mom in the old Campbell’s Soup commercials. Donovan whined that he wanted his real mom to be in the commercials so the actress who played Ms. Noble was fired. Then Donovan McNabb went on to choke in the playoffs for the fifth straight year.

Typical of other shows fitting this formula, City Guys followed this group’s adventures in high school and their city problems. Dating, dealing with parents, and other things were usually fodder for City Guys. The one episode other than the episode where Shaun Weiss plays a flower delivery guy that stands out to me is the Christmas episode. My family wasn’t going to get a Christmas tree that year then my sister watched the City Guys episode and she bought us a tree. I guess in a way she bought herself a tree more than anything else.

(Look, another picture of them doing nothing)

I would recommend anyone to check out City Guys if they ever had the chance. They probably won’t ever have the chance though because I have no idea how you would ever get yourself a copy. Search through yard sale VHS bins. I’m sure somewhere out there someone taped all of the episodes and then you can thank me for recommending a C minus show.

I looked it up and the show did make syndication on WGN. It was also briefly syndicated on BET from October 2, 2010 until October 16, 2010. Yes, two weeks.