I really didn’t know what to title this one. Not too long ago, I wrote about Disney Princesses and while I was writing and researching (I’m making this blog sound so important) I came across so many female characters that get swept under the rug because they aren’t technically princesses. So I figured I would touch on some of those gals because being a princess these days is totally overrated.

I guess I’ll start with Alice from Lewis Carroll’s Alice’s Adventures in Wonderland which Disney turned into “Alice in Wonderland”. You still with me? Can you tell that I don’t know how to use quotes or italics? Sweet.

Alice was a pretty chill kid who lived in the English countryside. I always loved her blue poofy dress with the white apron, white tights and mary janes. So adorbs. Even though the girl can dress, she’s not a princess. She falls asleep under a tree and when she “wakes up” she chases a white rabbit down it’s hole. Lots of white in this story. Soon Alice is tumbling down into wonderland where she meets many different characters. Some of them are super trippy (The Caterpillar), some are mad (The Mad Hatter, The March Hare, The Cheshire Cat), and some are just plain weird (Tweedledee and Tweedledum, The Queen of Hearts). Alice doesn’t talk too much in her animated movie, but she manages to cry a lot. Typical girl. At the end we realize it was only a dream and that Alice must be on some sort of drug.

This next babe didn’t make princess status either, but she’s probably the most undeserving so it’s fine. Wendy Darling from Peter Pan didn’t want to grow up. Oh cool Wendy. I’m pretty sure there’s a club for that–it’s called EVERYONE IN THE ENTIRE WORLD. Like Alice, Wendy goes on an adventure, but she has to bring along her brothers, John and Michael. Peter Pan, their guide, never grew up because he escaped the real world and went to live in Neverland. He shows the kids how to fly, introduces them to all of his friends, and almost gets them killed multiple times. Gee, what a pal. Wendy ends up going home because she can’t hack being a kid forever and ends up playing “mother” to all the lost boys. BUZZKILL. 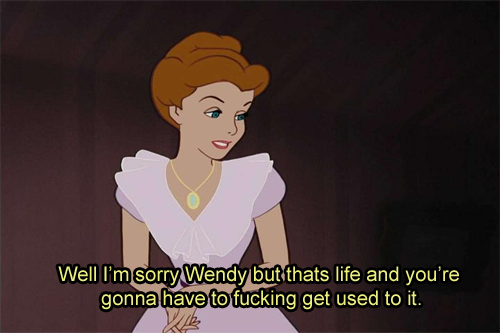 After that I would have to say my main bitch Pocahontas makes the list. Now, she was probably the closest to being a princess because she was the daughter of a chief and eventually made it over to England to dress in the finest gowns. She knew what was up. However, she was a bit of a free spirit and didn’t wear shoes for a good portion of her life. John Smith made her realize that white men aren’t so bad, even though they end up killing most of her people. She’s basically a traitor is what I’m trying to say. But she’s a pretty traitor, who can talk to animals and paint with all the colors of the wind and cliff dive. All the makings of a Native American princess.

Esmeralda definitely belongs on this list because she’s beautiful and kind and has a goat. She’s also a gypsy. In The Hunchback of Notre Dame, she plays the object of affection towards many men. Almost every man. This movie was kind of messed up actually. Like, Quasimodo was super into her and so was Phoebus the knight (or whatever he was. He wore armor so he’s a knight in my eyes.). Frollo, the evil archbishop who locked Quasimodo away was also into Esmeralda but in like, a creepy, rape-y way. She befriended Quasimodo for reasons unbeknownst to me (she’s nothing like the gypsies on My Big Fat Gypsy Wedding) but ultimately chooses Phoebus in the end. Smart decision, but very improbable. Nice try Disney.

Is it just me or are there more non-princesses than actual princesses? This is exhausting. Megara makes the list because she’s a bitch and super skinny and sings really good songs. She has a past of falling in love with the bad boys and for some reason she makes deals with Hades, the god of the Underworld. Hercules, half mortal, half god, grows up on Earth and makes a name for himself with his strength and fighting powers. Hades puts Meg in Herc’s path to distract him from fighting. They both end up falling in love. Meg sacrifices herself for Hercules and ends up becoming a goddess which is way better than princess status. So screw you Meg.

Last but not least is Fa Mulan. She’s the daughter of a lower to middle class Chinese family. I don’t know why they didn’t leave her to die (didn’t they hate girls?) but it’s a good thing they kept her. Instead of going to the matchmaker and becoming a perfect bride, Mulan sneaks off to the army to protect and honor her family’s name. I’m pretty sure cross-dressing would only tarnish people’s idea of your family, but Mulan goes for it, trains hard, saves China, and eventually gets a husband. She also has a pet dragon and talks to her ancestors. So I guess you could say that she’s well rounded. The perfect anti-princess.

Who is your favorite Disney misfit? Can you think of others?