I don’t know what is wrong with me that I think a movie about Robin Williams dressing up as an older British lady is a great classic film, but I do. Mrs. Doubtfire is one of those movies I can watch a million times and probably already have. It has something for everybody. We even get to see Harvey Fierstein play a different kind of role, a gay man with a lot of character. Only in a Robin Williams 90s film people. 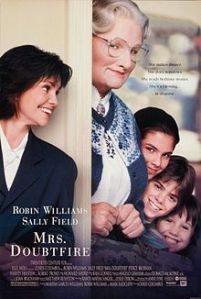 Mrs. Doubtfire is a great film because it deals with a topic that at the time was still a taboo, the Lawrence brothers. Lawrence Brother Matthew plays one of the kids in the film. He is probably the least talked about Lawrence brother too for some reason. Joey paved the way for them and Andrew is the one with the most future. Matthew is kind of stuck in the middle. I feel bad for him because he’s a very talented actor. One part in the film involves him walking in and sees Robin Williams’s penis. He totally freaks out like any person should at seeing such an awful object.

More taboo than the Lawrence Brothers though, this film deals with divorce. Robin Williams is married to Sally Field. Let’s be honest, none of us paid attention to the character’s names in this flick so why bother looking them up? Robin Williams plays himself, a fun-loving dad who doesn’t take things too seriously. He’s been having marital problems and when Sally Field comes home and sees he threw his son an awesome birthday party she PMSes all over the place, not literally. She tells him she wants a divorce which then causes a chain reaction of events.

Sally Field is so caught up with work that she decides to get a housekeeper to look over the kids and stuff. She doesn’t trust Robin Williams to do the work even though they’re “his god damn kids too.” Upon hearing about her need for a housekeeper, preferably a female because we all know how gross males who work with children can be, Robin Williams enlists the help of gay brother Harvey Fierstein who has access to makeup and masks because gay people are into some strange things, like having jobs that involve makeup and masks which he does. 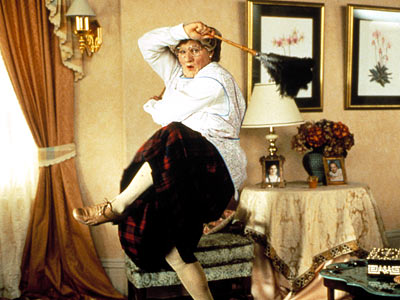 Robin Williams gets everything prepared after over the phone he has already created his character, Mrs. Doubtfire. She is a British nanny who used to work for the Smythe Family. She’s pretty big for a lady which she used to her advantage when she played fullback for soccer. She calls it football though and she uses this to connect with Matthew Lawrence. She also uses her other daughter played by the Matilda actress, Whatsherface, and makes a mention of Stuart Little to impress her. There’s nothing used to impress the oldest daughter, Randy Quaid’s daughter in Independence Day, because she is an older teenage who cares about nothing other than not getting pregnant yet still remaining adventurous. Why did I refer to Mrs. Doubtfire like she was a person? She’s Robin Williams in drag. Let me not get carried away like this.

There are a few classic scenes in this film as the mayhem continues. There’s the great line “It was a run by fruiting” when Mrs. Doubtfire throws a piece of fruit as Pierce Brosnan’s head. I never got the joke until I saw a news story about a drive-by shooting. I laughed and laughed then realized I shouldn’t because people were killed.

Another classic is when the social worker comes to visit Robin Williams’s apartment to see if it’s suitable for children aka not too many sex toys lying around, heroin needles cleaned to sparkle. For some reason she visits him on a Friday night. Why is a social worker visiting a deadbeat dad on a Friday night? Shouldn’t he be working a double-shift then? Shouldn’t she not be working? Friday night is the one night of the week everyone goes out and lonely people hide from the world. The last time I went out on a Friday night was probably 2006 and the only reason I did was because I owned a misprinted calendar.

Anyway, the scene that happens while at the apartment is the whole “Hellooooo!” part. If you have seen the film then you will remember this happens when he tries convincing the social worker that he, Robin Williams, and Mrs. Doubtfire are separate people who happen to be brother and sister. When he needs a way to cover up his face, Robin Williams smacks his face into a random cake he has in his refrigerator. The Mrs. Doubtfire part of him convinces the old social worker lady that this is some sort of beauty secret. She buys it because apparently social workers are easy to fool. 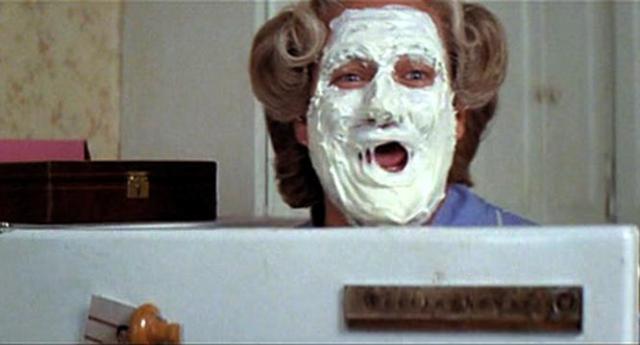 Mrs. Doubtfire is one of those films everybody can enjoy. At times it’s serious and shows just how much a father can love his kids. It’s sweet if not for the fact Robin Williams is their father. As much as I wouldn’t mind spending a day with Robin Williams I would certainly never want to be related to him. I feel like I would be way too exhausted listening to him do bad impressions of made-up people. Plus I just read he gave a cocktail waitress herpes in 1984. I will never be able to watch this movie the same ever again.

And if that hasn’t convinced you to see this movie then check out this fake trailer making it look like it’s a horror film.