Mooselicker Says: What you are about to read was written by a woman named Laura Wilson. I don’t know much about her, but she seems to hate Iceland and after this I’m thinking I do too. Did you know it’s not really even that icy? That would be like if the United States was divided on many issues. We weren’t though. We live up to our name. Here’s what you came for:

Are you high or on ecstasy?  Do you regularly drop acid?  If you answered yes to either of these questions then I have a show to recommend.  It’s called LazyTown, and it’ll help you get that nasty drugged-out demon off your back.

The Icelandics have a pension for being not American.  It’s practically what they do best.  Any country that collectively gives birth to Bjork and then proceeds to brag about it seems to be out of touch with the music and fashion standard held by most of the rest of the world.  And what kind of person would take a dead shark, bury it in the ground for more than 6 weeks, then serve it like it’s haute cuisine?  Someone from Iceland, that’s who.  So obviously the television shows over there would have to be pretty nutty to maintain the high bar of crazy set up in such a culture.

LazyTown was created by Magnus Scheving, an Icelandic champion gymnast and hopefully future James Bond villain.  The man doesn’t only bring the ideas and production notes to set each day, he’s also the main talent.  His character, named Sportacus (and it still makes me die a little inside to know that all the kids growing up watching this show will never correctly identify or pronounce the name “Spartacus”) is a dishy, muscle-bound superhero that helps out the residents in a small town in the middle of Nowhere, Iceland.  It seems that there would be little for him to do, since the town population appears to be 9.  But somehow everyone there is a menace to themselves and those around them, always getting into trouble and needing to be rescued.  It doesn’t help that there’s a Jim Carrey style bad guy named Robbie Rotten trying to inflict his own life philosophies on everyone else against their wills.  Nobody wants to eat a lot of candy and watch television, Robbie, take that garbage somewhere else.  We are all into aerobic dancing and raver music here in LazyTown.  A town with the word “Lazy” in it’s name.

So there’s a hero and a villain, so far so good right?  Let me tell you about the other characters.  Stephanie is an overtly girly girl (hot pink hair and all) who is only in CrazyVille – I mean LazyTown to visit her uncle Milford, who just so happens to be the mayor.  Convenient?  I think not – you see he is also a puppet.  The brother of one of Stephanie’s parent’s is a puppet.  Questions start to arise, but there really aren’t any answers.  Until you meet the other townspeople.  They are all puppets, too.  Sure, they are intricate puppets, but soulless non-human dolls nonetheless.  Stephanie, like anyone fearful for their life in a room full of stringless eerily animated puppets would be, is friendly and welcoming to everyone in town.  She teaches her latex peers how to dance and be active, and in return they don’t ever end up eating her face 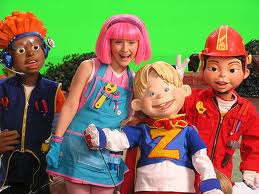 “If I just keep smiling, maybe they won’t turn on me Chucky style…”

A few more head-scratchers about LazyTown:  Sportacus is apparently the tenth superhero of his kind to come to town, what happened to the other nine?  Did they quit this ridiculous gig?  Perhaps tell the moronic townspeople to stuff it?  Also, Sportacus and Stephanie seem to be very friendly, almost uncomfortably so at times.  And at least once in every episode I say to myself, “there are only three actual human people in this town, how are there so many buildings and such a well maintained infrastructure?”

To be fair, Stefan Karl Stefansson – the actor who plays Robbie Rotten – is absolutely riveting.  He toured the US as Dr Seuss’s the Grinch some years back and I was sad to have missed it.  Also, the music on this show is pretty good.  Well, when compared against other shows, anyways.  If you follow up an episode of Barney with LazyTown, you’ll feel like you switched the radio station from Justin Bieber to Soundgarden.

Mooselicker Says: Thank you Laura for writing up this lovely piece. Bonus points for throwing in a Soundgarden reference at the end. Maybe we can eventually learn what other countries you hate. Laura can be reached by email at lauravwilson@gmail.com in case for some reason you are a strange superhero offended by anything you read here.